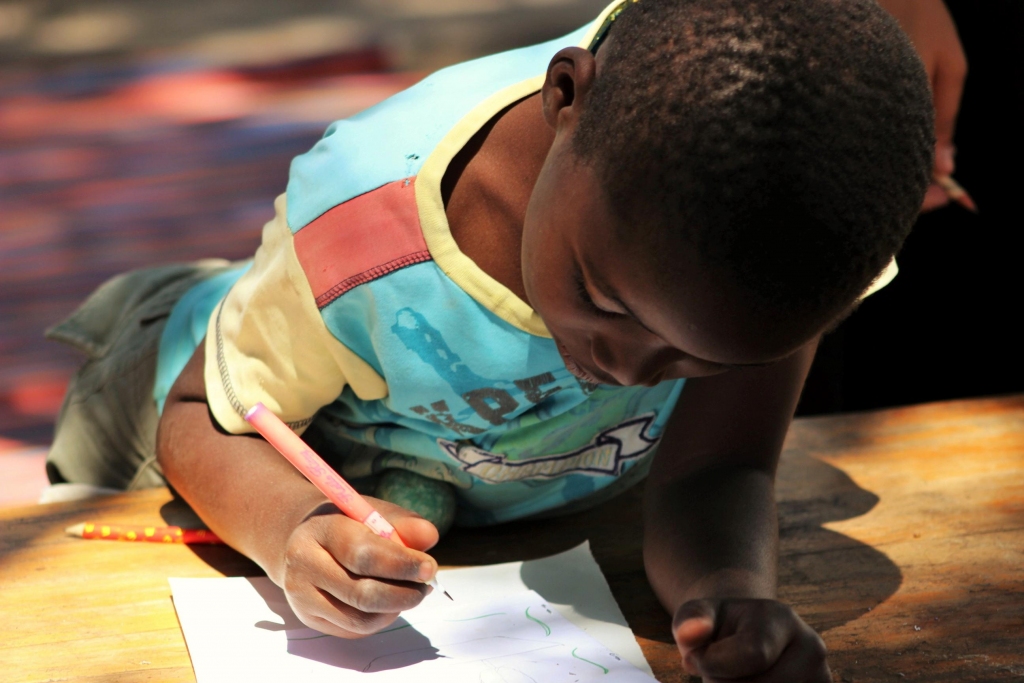 International Literacy Day, held each September 8, celebrates and promotes literacy among youth and adults around the world. Through the United Nations Educational, Scientific, and Cultural Organization’s (UNESCO) various initiatives such as book collections, read-a-thons, writing competitions, and open readings of original work, communities around the world encourage others to spread literacy and help those who are learning to read for the first time.

The help2kids Children’s Home created their own activity, led by the newest member of our team in Tanzania, Justine. Justine, the new Children’s Home and Nursery Coordinator, launched a project to have every child create their own book.

“Many of the kids vary in age,” Justine said, “so I was trying to figure out a way to promote reading and writing while also catering to the skill level of each child.”

Each child created their own story, had their English reviewed and corrected, and then rewrote the story for their final copy that included original illustrations.

The books were also a way for the kids to practice their writing. While they speak English frequently at the Children’s Home, this was a good opportunity to hone and improve their writing skills. Through this activity, they were able to get much more one-on-one help and personal feedback than they might receive at school.

“It’s fun to see how excited they get,” Justine said, “and I think the kids do appreciate learning and acquiring new words and new grammar. I think if you tried these activities with another group of kids they may think it was boring. These kids are so excited to learn, and that’s my favorite thing about this book writing activity and study hall.”

In study hall she focuses on these books as they are set in an environment that is somewhat familiar to the children. When Justine took out the first book she brought, all the children were excited to see the cover.

“They kept saying the boy on the cover of Akimbo and the Snakes looked like Pascal,” (one of the children at the Children’s Home) Justine recalled. “The book is about snakes so occasionally I will throw out a fact about snakes, but most of the time they already know it. I can tell they are definitely relating more to this story and are more invested in reading it.”

This desire to read is paramount to the International Literacy Day movement. While the kids at the help2kids Children’s Home are learning to read English as a second language, basic literacy in Sub-Saharan Africa lags behind other regions according to UNESCO.

Activities such as book writing and reading together enhance students’ literacy skills, whether it is in English, Kiswhaili, or any other language. Those skills become ingrained in the children when they can relate their reading to their surroundings, like in the study hall books and in the activity a dedicated volunteer led just a few months prior.

The children were excited to learn about books set around Tanzania. After showing the kids how authors were able to relate to them while sharing their experiences, Kaitlyn announced her plan to have the kids create their own storybook.

With valuable assistance from Aila, another help2kids volunteer, they led the students through the creation of a storybook, in which they all had a part.

“I kept telling them throughout the process, ‘This is your own work. This is something of value,’" Kaitlyn said. “The first day that I got there I drew a picture and they were really impressed by it. Then I ripped it up, crumpled it, and threw it on the ground. They were like, ‘What did you just do? No!’ I told them, ‘Well, now you know I feel when I see you do amazing work and then just throw it away.’”

It taught them not only to respect their own work, but each other’s work as well.

Injecting personal values, environment, and experiences into the children’s fable was a major goal for Kaitlyn. The children had a brainstorming session where they threw out ideas for the story, and she encouraged the kids to pull from their experiences at the Children’s Home to decide which morals would be the focus of the story. They chose forgiveness and peaceful living as the most important values they’ve learned here.

The children were the idea-machines behind the narrative and Kaitlyn helped make those ideas into a cohesive story – but only in English. She thought it would be beneficial to have the book in Kiswahili as well, so she sought out Tausi, the oldest girl at the Children’s Home, to help translate the book. It took several hours of hard work, but it paid off when it came time to show the final product.

At the book reveal, the children were eager to share what they learned from the book’s message and the process of creating it. Even the children who did not work on the book shared what the story meant to them. The kids felt empowered by the activity and expressed their confidence in storytelling.

“For any child to understand that their life and their experience is worth telling and that they have the skills in order to do that is one of the greatest things a teacher can do,” Kaitlyn said. “It was probably one of the most special moments of my life. It was really amazing to be able to see the kids take everything that I wanted them to learn and discover, and for them to make it their own. That’s how I know I succeeded.”

help2kids aims to help all of the children we serve develop a passion for reading and a desire to continue improving their English and Kiswahili skills, so that they have the tools to create a promising future for themselves and those around them.

You can support the help2kids Children's Home by clicking the donate button below and selecting Tanzania. You can also promote literacy at our partner Bajeviro Primary School by creating a campaign to provide them with textbooks through myhelp2kids.org. From all of us at help2kids, thank you for your interest and continued support.